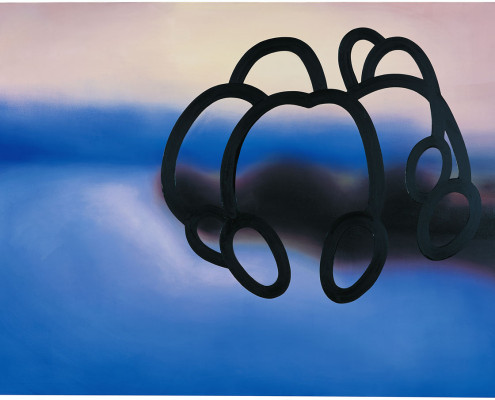 A clear, brilliant blue fills the foreground and spreads into the background. This expanse of color extends to the horizon, leading our eyes to the space above, which overflows with light. The background is suggestive of a calm sea and a vast, open sky, a tranquil space where all sound has faded away. It has a cool, refreshing atmosphere that somehow transcends reality. Yuumi Domoto is an artist with a special capacity for creating vast spaces by skillfully arranging subtly nuanced colors. The background of this picture is an eloquent testimony to her remarkable sense of color.
But there is more to the painting – the configuration of thick, black lines in the right foreground curving into a group of egg-like forms. The artist points out that this image, which at first appears to be an abstract pattern, was inspired by a bunch of tulips in a vase drooping under their own weight. After hearing this, one can discern an image of flowers reduced to their most essential forms – flowers and stems – but there are no visible traces of the brilliant colors and sensuality characteristic of tulips. A group of black flowers with everything extraneous removed floats nakedly in space. But even though the colors and smells are gone, the quietly bending flowers come together in an overall form in which everything is firmly connected, and this form confronts the viewer with a strong sense of presence. This effect is produced by the bold but playful drawing, the effectively controlled brushwork used to execute the thick, black lines.
Domoto’s paintings are often composed of freely undulating lines placed against bright, expansive areas of color. In this work, the thick, black lines have an exquisite, concentrated force, and the flower forms they create project a mysterious, fascinating sense of unknown life. Looking at the weakened flowers in the vase with drooping heads, the viewer is filled with a sense of mourning for the gorgeousness and brilliance that will eventually be lost and prayerful expectations for the beginning of a new journey of life. This painting is an elegy to earthly flowers and at the same time a homage to heavenly flowers that transcend reality. It evokes an essentially lyrical, poetical world. The ocean stretching out into the background and the sky filled with light create this poetic effect with pure, fresh sensations that eliminate any complexity. The world created here is endlessly pure and plaintively beautiful. The title, which means sadness or melancholy, reflects this quality.

“After all”
Scroll to top