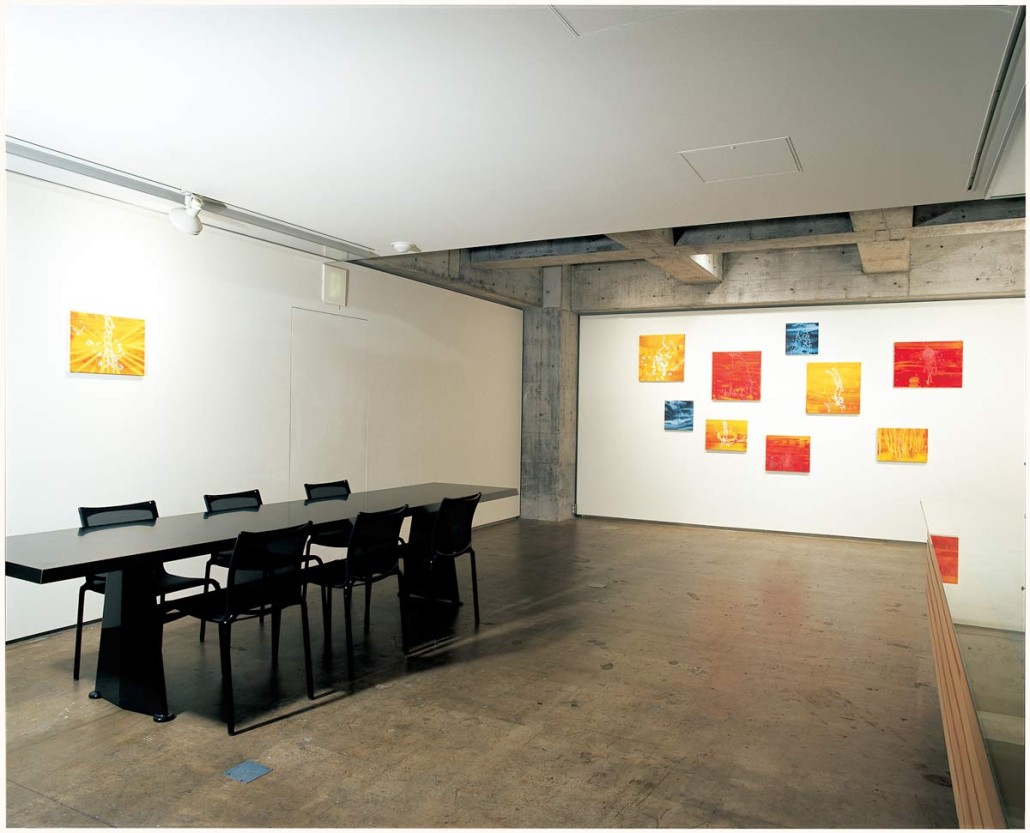 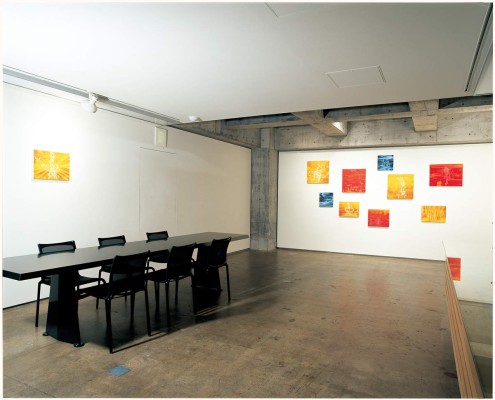 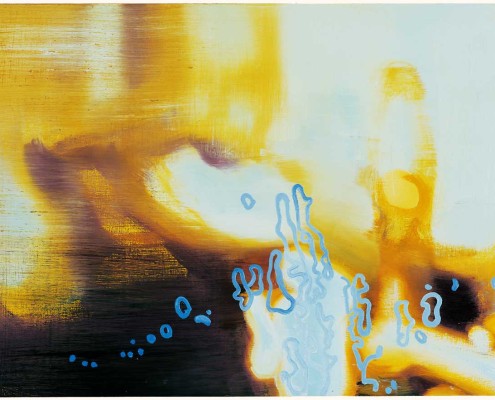 I visited Yuumi Domoto’s studio in the early afternoon on a hot day in August. Domoto was excited because this was her first solo show in four years. She said that she was feeling impatient because she had so many things she wanted to express, so many experiments she wanted to try. She told me, “I want to express everything I am thinking, even if the result is untidy.” How would it feel to want to do so much?
The theme of her new work is “solitude, love, and lies.” We no longer see the thick black lines that stand out clearly and boldly against an abstract background, some of the most prominent elements in her previous paintings. Blue lines are combined with expansive areas of color – red, yellow, and orange – that project a sense of dazzling light. Forms that seem splashed onto the surface have the appearance of dancing figures. Just what are they?
These forms are created by dripping paint on paper and moving the paper about by hand. The artist says she is fascinated by “the beauty of lines that arise from necessity” and has been making drawings of this type for a long time. To some extent, she has developed an ability to control the strength and weakness of the lines, but she leaves the forms that come about naturally just as they are. “I paint with the weight of the medium. I effectively employ both my own will and random effects.” The result is a self-portrait of the artist and appears to be take human form.
The figures created in this way on paper pass easily and quickly into the mind like images that suddenly stop moving due to malfunctioning of a television picture tube. We see a figure falling head down, a figure trying to avoid being blown away by a wind created by the momentum of the brush, and a group of figures sharing suspicious gossip. It is as if trees swaying in the wind were taking on human form.
The artist digests the figures resulting from this process in her own mind and paints them out once again in areas of color on canvas. In placing these figure-like images against colored backgrounds, Domoto intentionally creates a situation where no point comes into focus. In previous paintings featuring images with thick, black lines, she takes pleasure in the contrast between the strong lines and the background. In her new works, however, she departs from this method, which she finds “too fixed and intentional,” and experiments with compositions in which the image and background have a more flexible relationship, coming together as they move in and out of each other.

In a group of smaller works, she has painted views from ordinary, everyday life – a kitchen sink, a garden, city streets at night – as background. These are the kinds of scenes that we do not always perceive clearly. We often look at them absent-mindedly and even, at times, see them indistinctly through tears. Under such conditions, we may have a sense of these images melting in the eye. Such an impression may be particularly strong when one feels downhearted, distressed, or sad, perhaps at times when loneliness creeps into our lives. Domoto says, “Everyone is lonely at times but forgets when they are happy. It seems that I fall into the trap of loneliness when I feel unhappy.” She undoubtedly has a real understanding of such experiences at present due to accumulated experience. Realizing that “I want to paint the fact that, after all, life is wonderful,” she began making larger works. The light in these paintings is sometimes warm, sometimes harsh. Human figures and stories interact with backgrounds overflowing with various kinds of light.

On the way home after talking to Domoto, I suddenly thought of the words, “Warming Eggs under Black Clouds,” the title of a collection of essays by the poet Koike Masayo (published by Iwanami Shoten). In this book, Koike refers to a poem called “Ballad of Dark Clouds” by Gunter Grass. The poet observed a hen sitting on her eggs and never moving as dark clouds approach and pass by and depicted this scene in his poem. Koike concludes,

Just before the storm comes. Everyday life appears uncannily grotesque to our eyes, brimming with expectations of a thunderstorm that could strike in just a few minutes….I feel anxious as I read this poem, but this anxiety is an anxiety that I know well, one that belongs to me. As we warm the ominous eggs in our minds, we are the hens beneath the dark clouds.

As long as we are alive, we will be rained on. In everyday life, we are pressed for time, tell lies and try to conceal them, and often feel regret. Many people believe that this is the nature of reality. That is why, however, people have the capacity to love and to believe in love. Yuumi Domoto confronts dark clouds directly while continuing to warm her unique eggs, energetically representing this world in paint. Our hearts and minds respond to, and resonate with, her paintings.

Want to join the discussion?
Feel free to contribute!